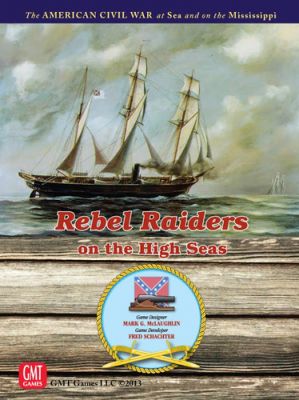 SKU
GMT1304
Barcode:
817054010363
Category:
GMT Games
Details
Rebel Raiders on the High Seas is a comparatively short and simple game of the naval conflict at sea and on the great rivers in the American Civil War. Easily playable in less than three hours, Rebel Raiders on the High Seas is a strategic contest between two players, one seeking to reunite the Union by force, the other to maintain its new independence in the face of the escalating industrial might and resolve of its northern brother. More of a representation than a detailed simulation of that conflict, the game is intensely engaging, highly interactive and moves along quickly, with players constantly responding and reacting to their opponent’s moves.

Although Rebel Raiders on the High Seas is not a card-driven game, the cards ensure that each game is very different, and that a strategy which worked in one game may not prove as efficacious in the next. The game is also customizable with a menu of elective rules to provide each side with a variety of “what if” options to further vary play.
Components