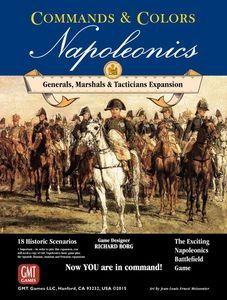 The Commands & Colors Napoleonics game system allows players to effectively portray epic Napoleonic battles, as well
as smaller historical actions. The scale of the game is flexible and varies from battle to battle. In some scenarios, an Infantry unit may represent an entire division, while in others a unit may represent a single regiment or battalion. During play, the Command cards drive movement, while creating a “fog of war”, and the battle dice resolve combat quickly and efficiently.
The stylized battlefield maps emphasize the important terrain features and highlight the historical deployment of forces in scale with the game system. Finally, the Napoleonic tactics you will need to execute to gain victory conform remarkably well to the advantages and limitations inherent to the various Napoleonic National Armies of the day and the battlefield terrain features on which they fought.
Generals, Marshals & Tacticians is the fifth expansion for GMT’s Commands & Colors Napoleonics game system. There are 18
historical scenarios in this expansion. A number of the scenarios focus on the engagements of the French army of 1813 against the Russian, Austrian and Prussian armies around Leipzig.

The expansion also introduces a brand new deck of Tactician cards. The Tactician cards, along with the updated deck of Napoleonic Command cards, are designed to spice up each and every player’s Napoleonic experience by enhancing the role
of Leaders on the battlefield, without adding additional complexity or pages of rules. Overall, the Tactician cards add some exciting new command possibilities to the scenarios included in this expansion. Also included is a comprehensive listing of Commander tactical ratings for all Commands & Colors Napoleonics scenarios released to date. This listing will allow players to refight any previously released Napoleonic scenario using the
new Tactician card deck, the updated set of Command cards and these Generals, Marshals & Tacticians rules.