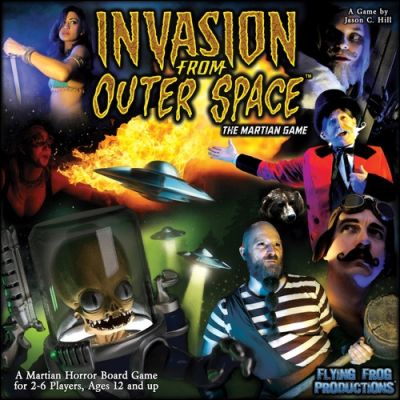 SKU
HEIFL013
Barcode:
9780984608003
Category:
Other Companies
Details
Invasion From Outer Space, The Martian Game is a fast-paced game of fiendish Martians, Big Top Heroes, and SciFi Movie Action. Players take on the role of either the Carnival Heroes, using their special talents and working together to fight off the Martian Invasion; or as the invaders themselves, waves of Martian Soldiers and Flying Saucers, blasting Humans with Ray Guns and unleashing their vile alien technologies upon the Earth.

Featuring a modular game board, eight Carnival Heroes to choose from (such as the Fire Breather, Strongman, or Jo Jo, the dancing Bear), an army of Martians to start the invasion (including Martian Champions such as the dreaded Zard Beast), and several different Scenarios to play that drastically change the game; Invasion From Outer Space is designed to create a cinematic feel as the story and game unfolds.

Also, as Invasion From Outer Space is built using the Last Night on Earth game engine, the two games are fully compatible. With ease, players can now have their Martians invade the small town of Woodinvale, Zombies attack the Carnival, or even play a massive game with up to three independent factions (Heroes, Zombies, and Martians). The possibilities are endless.

So drop those roasted peanuts, strap on your jumpsuit, and step into the spotlight...the Martians are Coming and the Invasion From Outer Space has begun!

Uses the 'Last Night on Earth' game engine, allowing for interconnectivity between the games.
The same Martians also make an appearance in ''Conquest of Planet Earth: Apocalypse''.
Photographic Artwork for Immersive Horror/SciFi Movie Action
28 Highly detailed plastic 28 mm Miniatures
Game comes with an Original CD Soundtrack to creep its way into the players' subconscious and raise tension and excitement
No two games are ever the same! Many Heroes, Scenarios, Game Cards, and a Modular Game Board offer limitless combinations.