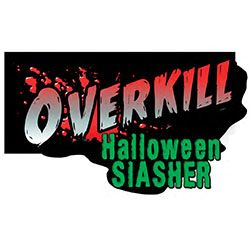 SKU
UPE10031
Barcode:
074427100315
Category:
Ultra Pro Entertainment
Details
Overkill is a card game where you compete to come up with the most ridiculous or creative horror movie-themed kill. Players take on the roles of various monsters from horror movie lore, and compete for the most prized victims – when the sun rises, the player with the most total point’s worth of victims wins!

Create a stack of six \"victim cards\" and compete to kill the top victim card in each of the six rounds by creating a gruesome tale with your murder cards explaining what you intend to do to said victim. Story cards numbered 1 to 6 that describe just how you intend to pummel them to death and with what, where, your ritual, when you'll stop the pummeling, and why you finally decide they're dead. But as you weave your tale other players might add on to you story with frustrating \"But\" cards that nullify part of your plan. Every time you play a card, you must read the entire story aloud which is really where this game shines, however other than a good laugh, the story you weave is irreverent for the victory, as the player with the most cards (1 thru 6, only one of each number may be in play per player) claims the victim. Different victims have different points, and and the end victim points are added up to see who wins the game.

Look it's a cheerleader, I'm going to skin her, with a chainsaw, in a creepy motel, while laughing maniacally, until the prophecy is complete, because she knows too much. But..... you won't be using that chainsaw because she knows your secret weakness!