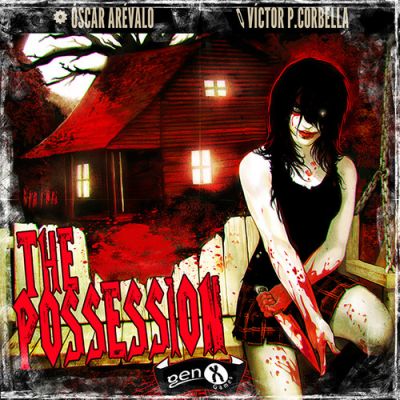 SKU
GNX181825
Category:
Gen X Games
Details
A wonderful weekend in a wood cabin with friends to relax, with drinks and food, a party...and blood! An evil as old as time has awoken and it is possessing you all by taking advance of your weakness. If nobody finds the book of the dead and destroys it, this will be your last night as humans.

The Possession is a game for 3 to 5 players in which time is against them. The evil is stalking you and each round the players could be possessed by it, and becoming one of the thirsty blood demons looking for living souls, the other players' souls!

At the beginning of a round, all players roll a die: the more wounds you have, the more easily you become a possessed. Then players play an action card to indicate how many actions they can play and how much they risk suffering an evil event. This risk is higher in the cards that give more actions.

When a player finds enough pages from the book of the dead and burns them in an altar, before the evil owns all players, he becomes the winner. By using the action points, players can cover the house looking for the pages as well as objects, weapons, and keys to get into the basement and attic-; they can also rest in order to get back the action cards played and heal wounds to keep alive.

A possessed player must attack his friends so that the evil inside him feeds of his crime and not with his soul. He will be able to smash doors, escape for windows to get inside in other rooms and so, surprise another players. He will have more action points depending on his possessing level.

The other players can attack the possessed ones. The only way to stop them is dismembering them completely — but these amputated members will be wandering around ready to claw and strangle whoever gets close enough...