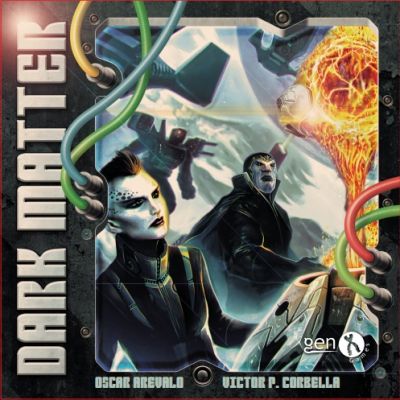 SKU
GNX181979
Barcode:
8437010181979
Category:
Gen X Games
Details
More than three millennia have passed since the human race left its native land. The discovery of the Sophia triad made real some theories previously thought impossible, theories that were experimented to prove their viability and each of them were performed, no matter whether it was possible or not.

Dark Matter is a game from 2 to 4 players. Each player starts with three unique cards to play all the game. Each card is divided in two zones in its obverse and reverse, and each zone has one or several skills. Players play these skills to get matters to terraform planets, to recruit soldiers, to attack enemy planets, to improve their own planets, to use heroes and politics to manipulate their cards and opponents cards, to get resources, and more.

But players won't play only with their own cards. They can also use the opponent cards. Each time a card is played it changes its position, so possibilities are infinite. When a player uses his cards, he spins his card (from front to back) and when he uses the opponent cards, they flip the card (from up to down). In this way, new matters and skills are available to play more actions.

Get victory points controlling planets and use them to get more resource gems, soldiers or skills. Recruit a huge army gives also victory points and it helps to get enemy resource from their planets. All this with only three cards in hand. Impossible? Try it out!